Skip to content
12Jan 2015 by Jeremy Weiss No Comments

Head on a Swivel! 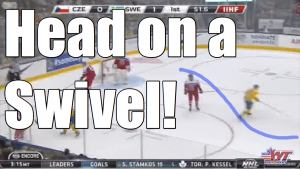 I love watching the World Junior Championships each year. It’s a chance to see a bunch of talented, young, “up-and-comers” playing some high-quality hockey, in a fun and exciting atmosphere.

The nature of the games, and of the tournament in general, lends itself to a great study of the game. The players are smaller than in the NHL, there’s a bigger gap between the top and bottom teams, and the games are more of a finesse style of play. Which means, lots of scoring, especially in the early rounds, and lots of well-executed systems play.

Even at the highest levels of play, you still see mistakes made. And games are won and lost based in the DETAILS. In this video, we see what happens when a defenseman fails to have his head on a swivel. On-ice awareness is essential at ANY level of play, but especially at the highest levels of play. If a player doesn’t know what’s going on around him, a good team will take advantage of that and the puck will be in the back of his net before he knows what hit him!