The 3 Shooter, Rebound and Recovery Drill is a great way for players to work on their shots, while goalies work on their movement!

This is a great, simple, goalie drill. It allows your shooters to work on their shots while the goalie works on his/her movement around the crease, angles and rebound recovery. Here’s the diagram and explanation: 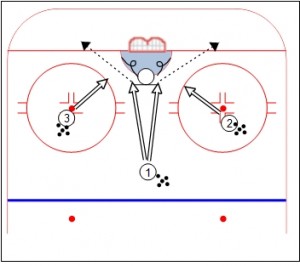 VARIATIONS:
1. Move the shooters closer or farther away
2. Activate shooters 2 and 3 to play the rebounds if applicable
3. Add a 4th player that passes the puck from the corner to the shooters

One thought on “3 Shooter, Rebound and Recovery”