USA Hockey’s New Icing Rule, and How it Affects your Penalty Kill

A few days ago I did a post about USA Hockey’s new icing rule, and what effect it would have on your team’s power play. I recommend you check it out before moving forward with this post. You can check it out here >>

The new icing rule aims to force more puck control and skill plays from the shorthanded team, rather than just being able to dump the puck, which is a less-skilled play. Here’s a quote from USA Hockey’s site:

USA Hockey has modified its playing rules for the 14-and-Under age classification and all younger age classifications (youth and girls) to no longer legalize icing while a team is shorthanded. Beginning with the 2017-18 season, if a team ices the puck while shorthanded, it will result in a whistle followed by a defensive-zone faceoff. The team that commits an icing infraction will be allowed to change lines and/or players prior to the defensive-zone faceoff.

The rationale behind this rule change is twofold:

First, and most importantly, the change will encourage greater skill development for 10U, 12U and 14U players. These young athletes are in their prime skill development windows and will benefit greatly from the increased emphasis this rule change places on promoting puck possession, puck protection and play-making (as opposed to merely firing the puck down the ice, which is a low-skill tactic). Second, the change prevents a penalized team from gaining an exception to a rule (icing) that is in effect while teams are at even strength.

The intent of these articles isn’t to debate the rule change. Whether you agree or disagree, the decision has been made. Our job as coaches is to do the very best we can within the framework we’re given. With that in mind, let’s talk penalty kill!

One tactic I try to teach my players is the idea of controlling the decision options the other team will have to make. In other words, we put the opponent in a situation where we know they’ll have to decide between Option A or Option B, then we have a planned response to either option. So whichever choice they make, it’s the wrong one. This concept will be very important in managing the penalty kill breakout, as you will be at a distinct disadvantage without the ability to ice the puck.

The Puck Moves Faster than the Skater

When I was about 10 years old, my coach (my father) taught us a simple, but profound concept. He had us all nominate who we thought were the fastest three players on the team. Those three guys lined up on the goal line, then he had the rest of the players each grab a puck, and they got on the goal line too. On the whistle, he had the players shoot their pucks to the far end, while the skaters raced the pucks. Obviously, the pucks moved WAY faster than the skaters. Even our fastest skaters were nowhere near the slowest pucks. His point was that the puck moves faster than the player, so good passing, as a team, will get you further than individual speed.

This is an important concept to remember in this new, PK Breakout situation we find ourselves in. We should expect to be pressured heavily, but good puck movement will go a long way in combating an aggressive power play forecheck.

Now to the “nuts and bolts” of this post. As described in the video above, there are a few key points, that if executed well, will give you the highest likelihood of penalty killing success: 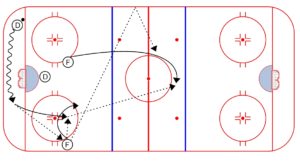 As soon as your defenseman gets the puck back, his or her first movement should be toward the quiet zone. Everything starts from there. Depending on the pressure, the defenseman will either skate the puck to the weak side, misdirect and come back out the strong side, or run a D to D pass behind the net. In my mind the D to D pass is the best option.

In a 5 on 5 situation, we like to have a boardside option, with a centerman providing middle support, and the weakside winger as a stretch option. In the 5 on 4 scenario, I’m going to propose still sending the weakside forward as a stretch option. This will force the opponent to make a decision (hold the blue line, or back up to protect against a breakaway), and will spread them out.

We still want middle support, so we have the defenseman follow his or her pass, and provide the support we’d usually see from the centerman. The weakside defenseman stays in front of the net, just in case.

Here are the options I see from this setup:

I’m interested to see how this all plays out this coming season. And would love to get your feedback on how it works for your team. If you use this setup, let me know how it goes in the comments. If you try something else, let me know that as well! In my opinion, the key to getting out from under an aggressive forecheck will be two-fold: quick puck movement, and spreading out the opponent with that unexpected stretch man. Good luck!