Skip to content
30Oct 2010 by Jeremy Weiss No Comments

The star drill is a great drill to teach young goalies the art of moving around the crease!

If done correctly, this drill will generate create good habits moving around the crease, and the goalies will become more “Crease Aware” (knowing where they are in their crease). Here’s the diagram, as well as a variation to take the concept to the next level: 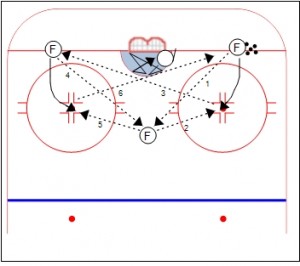 The Star Drill
Goalie starts at the post, then skates the following sequence (see our post on the 11 Visual Targets for Hockey Goalies)
1. Position 11
2. Position 6
3. Position 9
4. Position 1
5. Position 6
6. Position 3
7. Back to Position 11
8. Repeat the opposite way

Have the goalies perform this 2-3 times each. As they begin to improve, allow the forwards to shoot at random intervals.

REMEMBER: have the goalie adjust to the rebound if they are not able to cover or trap the puck. Create good habits, don’t let them just stop the puck and move to the next area.