Timing in hockey is a skill that requires not only physical ability, but mental ability as well. It is not uncommon to see young players buzzing around in practices or games – they appear to only have one speed: FULL SPEED. Since they’re working hard, they think they’re doing a good job… In reality, it is the player who arrives in the right spot, at the right time, with speed that will be the most effective.

Teach your players to pass to designated receiving areas, not necessarily to players. The responsibility lies with the receiver to make the play work. The receiver must select the proper route to the receiving zone so that he or she arrives on time, with speed. He or she must be ready to receive the puck when the passer is ready to move the puck, that’s timing! Here’s the diagram: 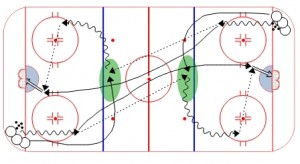 Variations:
– Have second player trail as the lag man for a drop pass instead of driving the net
– Add a third player as a defenseman to play a 1 on 1, or as a forward for a 3 on 0
– Utilize other attack options such as a misdirection in the zone followed by a cycle to the second player supporting
– Be creative!