Skip to content
05Sep 2012 by Jeremy Weiss No Comments

During the 2012 Stanley Cup Playoffs, I did a video dissection of Ryan Carter’s game-winning goal against the New York Rangers. The video got quite a few hits that night, and I had a number of requests to dissect the play from the defensive point of view. People wanted to know what went wrong, and what the Rangers could have done differently to prevent the goal. So I put together a follow up video, showing how I would have beaten the 2-1-2 Forecheck the Devils were using. Since we’re ramping up for the new season, I thought it would be a good idea to brush up on beating the most commonly run forechecking system, the 2-1-2. 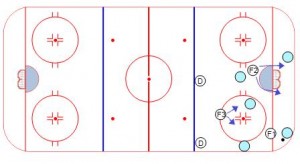 How to Beat the 2-1-2
The first step to beating the 2-1-2 is for the puck-side defenseman to determine whether the opponent is using a stack or a spread. If he reads stack, he MUST get the puck to his weak-side partner, no matter what it takes! That’s where the open ice is, and that’s where the highest likelihood of a successful breakout lies. If he reads spread, he’ll need to beat his strong-side attacker, either with a misdirection or a reverse pass to the centerman, then break out the strong side.

What went Wrong?
In this clip, you’ll see the Rangers defenseman was more worried about jockeying with the Devils’ first man in, than he was about getting the puck to the weak side. Because of this, he ended up with poor body positioning, and got bombarded by the Devils’ aggressive forecheck. The 2-1-2 worked out in text-book fashion for the Devils, first man hit and pinned, second man picked up the puck and hit the third man coming into the slot for the game-winning goal.