Skip to content
22Apr 2015 by Jeremy Weiss No Comments

Hanging a Forechecker on the Net While Initiating a Breakout 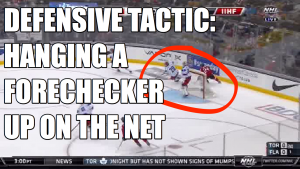 Initiating a breakout is one of those situations that happens multiple times every singe game. It’s important to “arm” our defensemen with the tools they’ll need to be successful in these recurring patterns.

One such tool is the tactic of hanging the forechecker up on the net, as shown in the clip above. This tactic involves two steps:

When used properly, this will open up time and space, and make the other team have to make decisions––which is what we’re all about. As the defenseman skated up ice, other players will have to leave their coverage to pick him up. Then it becomes a numbers game; the idea is to draw players to you, then beat them with a pass. This turns a 5 on 5 into a 5 on 4, then into a 4 on 3, and so on until you’ve got an odd-man scoring attempt.