A good buddy and teammate showed me this today. The original source is unknown, but I thought it was fitting for the time of season. The dad who wrote it definitely understands what hockey’s really about… Almost brought a tear to my eye thinking about the times I had with my dad, and the times I’ll undoubtedly have with my son. 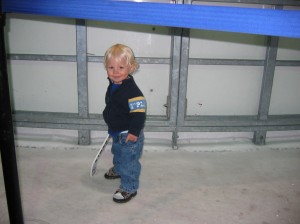 These next few weeks may be the last times I see my boy lace ‘em up with an organized team. Fourteen years ago we started, not really knowing anything about this marvelous game. He skated out onto the ice as wobbly as can be. Tonight he glides across the ice cutting his edges into the glimmering sheet of white and throwing snow up to the top of the glass with a hockey stop we could only dream about way back when. He’s worn different jerseys, traveled all over the state and country, in rinks at 6am and 12 midnight. Hotels, motels, sleeping in the van and now the bus – he’s been a real road warrior. He’s had great coaches and some not so great coaches. Some years have been great some not. But all in all, he’s met so many other young men and women that have the same passion and they give their all at game time.

Like you, we’ve spent thousands of dollars on this habit forming game. Sometimes we fell into the marketing and bought the white Fedorov skates, the Nike aluminum sticks, the mini stick games, etc., but we did it for him.

He’s played forward and defense and even played goalie at a tournament and let in 20 goals, but still loved it. Always smiling when he came off the ice, he put reality into our over competitiveness as parents. He simply loved the game.

This week though, it might be different. It may finally hit him that from here on, it might be an occasional lunch skate, Friday night drop in, or maybe adult leagues. How will he deal with it, win or lose after that final game? How will I deal with it?

I only hope we’ve raised him so that his perspective will be positive. He knows that he’s not our only son. Yes, he has a brother that skates too, but over the years he’s had hundred of “brothers” – his team mates. Some have been “best buds”, others have faded into history. But no matter what happens, when and where he ever meets up with these kids again, they have a bond that no one can ever take away. Without a doubt, a hockey team relationships is unique – especially the locker room antics. 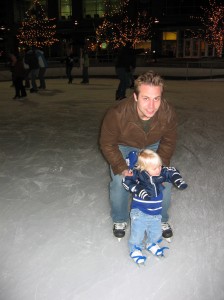 Over the next few years, tragedies will occur. Families will split up, some of the parents or even team mates will die and life may no longer be as simple as pulling on the old smelly gear. How will my son deal with this? I don’t know, but I do know that through the help of hundreds of other parents, he’s learned so much more about life than I did as a child.

After the last buzzer, God it will be hard. But hugs, tears of disappointment or success will still support the love I have for him and his accomplishments.

Maybe he will continue on. Maybe it’s Juniors, maybe college club hockey, and yes, maybe beer leagues. I may not be able to see him, but I’ll know that if he’s on the ice, he’s in his element and the world is fine.Son, thanks for the joy you’ve given me over the years, you’ve turned out to be an outstanding young man and I’m sure your future is bright. The only thing I ask of you anymore about this game is: When the time is right, please give back for honor and respect those that did the same for you.

Bless all the kids that will lace ‘em up this week and hit the ice in their last games.

One thought on “Some Hockey Nostalgia”