Skip to content
15May 2015 by Jeremy Weiss No Comments

I used this drill last week with a group of Mites and Squirts in a local clinic here in Salt Lake City. It was a progression from some of the skills we had been working on earlier in the session. This drill combines stops and starts, angling, and drive skating. 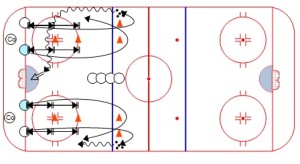 Stop & Start Angling:
1. Players line up as shown, offensive player (white) in the corner, defensive player (blue) toward the middle, players waiting in line near the blue line.
2. Offensive and defensive players start facing each other. Each stop and start is to be done facing each other.
3. On the whistle, players run a mini ladder: out to the first cone and back, then out to the second cone and back.
4. After the ladder, both players skate out around their respective cones, the offensive player tries to drive deep below the first cone, the cut to the net. Defensive player angles.
5. Stagger the starts of each side, so the goalie doesn’t face two shots at the same time.