Skip to content
01Dec 2014 by Jeremy Weiss No Comments

This is a fun one that touches on quite a few different skills, including backward skating, pivots, passing, drive skating, and shooting. Here’s the diagram and explanation: 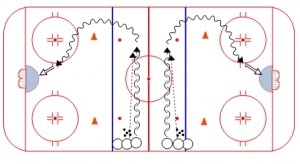 1. Players on each side of center at boards
2. First player leaves, skating backward, receives pass from second player in line–always receives pass on the side of his body he’ll be turning to
3. After receiving the pass he/she opens up and skates forward around the cone, driving wide to the net.
4. After shot, player lines up on opposite side

Variations: a) go around near cone instead of far cone; b) after pass, player joins for a 2 on 0