I’ve been using this Hockey Forechecking Drill in my practices, and it has worked really well for my team. The thing I really like about it, is that it allows you to work on a lot of different stuff at once. Obviously, the main focus is forechecking, but you’re also working on D-Zone Coverage, and Breakouts as well. 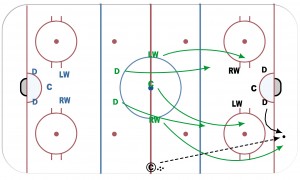 Here’s how the drill works:

Give this one a go – I think you’ll get some good usage out of it!