Many hockey situations occur in patterns. This simple hockey breakout drill breaks down these patterns into their simplest form, then puts them back together in sequence to mimic a game situation. Here’s the diagram and explanation: 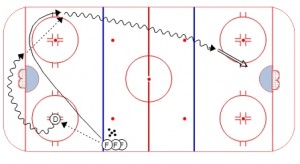 PHASE 1:
1.Set up forwards on the blue line, with defensemen on the close hash mark. Defenseman who is going steps out to the dot
2.On whistle, ﬁrst forward in line passes to the defenseman, then skates down around the bottom of the circle and opens up for a breakout pass
3.Defenseman skates behind the net, then passes to the forward on the boards, who skates down for a shot

Note: Teach forwards to pivot and keep their eyes on the passer while receiving the pass 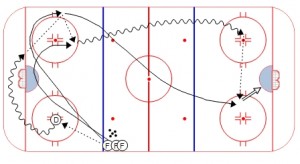 PHASE 2:
1.Same set-up as phase 1
2.On whistle, ﬁrst forward passes to the defenseman, then skates the same route as in phase one
3.Second forward in line plays the role of the centerman, and “shadows” the defenseman, who is skating the puck behind the net
4.Pass is made to the board-side forward, then a touch pass to the second forward, who is swinging through for support
5.Forwards attack 2 on 0

Note: As players improve, open up the option for a middle breakout to the second forward 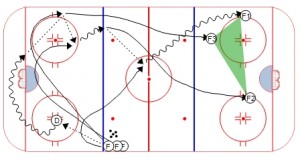 PHASE 3:
1.Same set-up as phases 1 and 2
2.Drill begins the same as in phases 1 and 2, this time we add the third forward as a breakaway man
3.The third forward times the play so he is breaking through the middle for a pass as the second forward receives the pass and gains control of the puck
4.Players attack 3 on 0 using the attack triangle

Note: Be creative with this set-up. Try adding a second defenseman for a D to D pass in stead of skating it behind the net. Open up multiple breakout options. 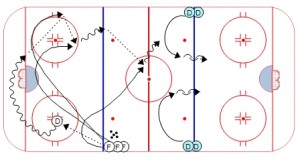 Note: Remind forwards to keep their heads up in the neutral zone. Work with your defensemen on judging when and when not to step up and intercept the stretch pass