Figure 8 Shooting and Deflection is a Great Shooting Drill

Here’s a quick and effective hockey shooting drill that incorporates shots from the points, and deflections in front of the net. I like to run this drill from both ends so the forwards get plenty of chances to execute. Encourage your defensemen to fire low, hard shots on net that the forwards will be able to deflect. This is a great game simulation drill for everybody! Here’s the explanation: 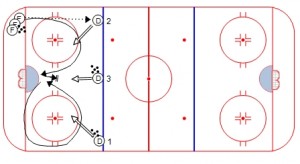 2 thoughts on “Figure 8 Shooting and Deflection”